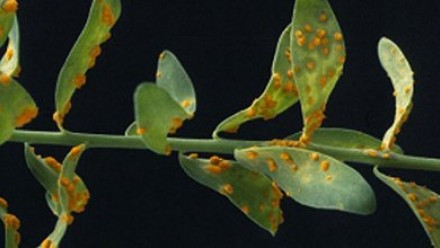 Plant pathogens produce secreted proteins during infection of their hosts and these proteins, known as effectors, aid in the infection process. In turn, plants have evolved disease resistance genes encoding receptor proteins that can trigger a highly effective defence response upon recognition of these effectors. Our laboratory is interested in understanding how resistance and effector proteins function. To do so, we study the infection of flax plants by the flax rust fungus, Melampsora lini, which has been used as a powerful model system to study the molecular basis of plant disease and plant disease resistance.

Using RADseq (restriction site associated DNA sequencing) and genetic mapping of RADseq markers (single nucleotide polymorphisms generated by RADseq), we have identified a number of RADseq markers that are closely linked to host-recognised effector genes (a.k.a. avirulence genes) in the flax rust fungus (Anderson et al., 2016). This Honours project will use these RADseq markers to identify candidate effector genes in the M. lini reference genome sequence developed by CSIRO Agriculture. Candidate genes will be cloned into plant gene expression vectors for functional testing via Agrobacterium-mediated gene expression (agroinfiltration) in leaves of flax plants carrying the corresponding resistance genes. Confirmed effector genes will be tested for their ability to suppress the production of reactive oxygen species triggered by bacterial flagellin or fungal chitin, a basal plant defence response against microbial challenge.

This Honours project will provide an opportunity to learn a broad range of molecular techniques and will further our understanding of pathogen effector biology. The project will be supervised by Dr Ann-Maree Catanzariti and Assoc. Prof. David Jones in the Plant Disease Resistance Laboratory, Research School of Biology in collaboration with Dr Peter Dodds, CSIRO Agriculture and Food.

Ann-Maree Catanzariti at annmaree.catanzariti@anu.edu.au or telephone 61256966