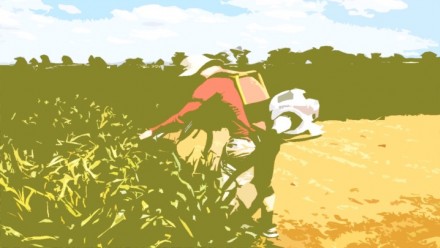 Fungi have highly plastic genomes and rapid reproductive cycles, making them fascinating organisms in which to study genome evolution and host adaptation. They also pose a significant threat to agriculture and food production, making them economically important.

In this project we use the latest sequencing technologies (PacBio/Oxford Nanopore long read sequencing and Hi-C chromosome confirmation capture) to generate chromosome-level, fully phased reference genomes for multiple (plant) pathogenic fungi, with a focus on the wheat stripe rust fungus. These genomes build the foundation on which to study host adaptation within and between species using sequence variation detection as well as comparative  and population genomics. The project aims to uncover genes that are involed in host adaptation on a single plant species, e.g., different wheat varieties, and genomic variations that underlie fungal speciation.

Within this project you will learn many different bioinformatic tools and at least one programming language e.g. python or R. These skills will enable you to assemble, annotate, analyze, and compare genomes in order to extract biological information out of large scale datasets.

Overall, we aim to provide a fully-rounded training environment that exposes you to many aspects of modern biology such as experimental design, reproducible workflows, data management, data handling, visualization, and presentation.

This project is open to Summer Students, Honours, Master, and PhD students in 2019.

This is a highly collaborative project and depending on the specific aspect you will interface with different collaborators. The project may include collaborative exchanges with international institutes as the Global Rust Reference Centre in Denmark.