Chris Fulton - the need for weed 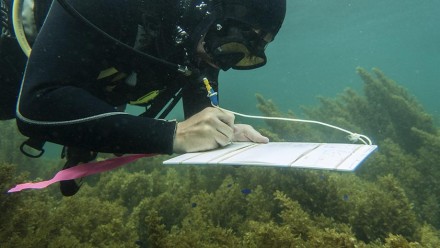 Ningaloo Reef might be famous for its whale sharks and stunning seascape but for ANU researchers, the real star of the show is seaweed.

Every year, more than 150,000 people travel the necessarily long distance to a remote town in Western Australia called Coral Bay.

Only 200 residents actually live there – all the rest come here to see Australia’s other reef, Ningaloo.

“Most Australians are aware of the Great Barrier Reef, but I’ve been surprised by how few know where Ningaloo is,” Associate Professor Chris Fulton says.

“It’s on one of the westernmost parts of Australia’s coastline, in a very remote part of the country, which is one of the reasons it’s remained near pristine for so long.”

But after conducting fieldwork there for 10 years with a team from the ANU Research School of Biology, he says that is changing.

“Especially once Ningaloo became listed as a World Heritage Area, more and more visitors started to come here every year,” he says. “Combined with the effects of climate change, the ecosystem is now under increasing pressure.”

All this makes his team’s research increasingly important.

While tourists can snorkel with whale sharks, dive with manta rays, go out fishing or enjoy the view of 250 different coral species from a glass-bottomed boat, the focus of Fulton’s team can hardly be called a tourist attraction.

“Most of the research on coral reefs around the world has focused on the coral habitat, where algae is often seen as a sign of degradation for the coral reef.

“But Ningaloo does not operate like the Great Barrier Reef or other well-studied coral reefs around the world. Ningaloo has, in fact, about four times more habitat in seaweed meadows than it does coral.

“It turns out the seaweed meadows are the engines of this ecosystem’s productivity. Every year the seaweeds go through an extensive phase of growth, and then all the biomass that’s built up over the summer breaks up and drifts around the reef. Some of it washes up on the beach, some of it washes out to sea, so that it’s feeding all the different parts of the ecosystem.”
While tourists might see it as a scourge on the pristine white beaches, Fulton says this seaweed is actually ‘a really good sign that Ningaloo is a productive, healthy coral reef ecosystem’.

By monitoring fish behaviour and populations over time, the ANU researchers have also discovered the seaweed meadows are as diverse a habitat as coral, and perform a critical function as nurseries for baby fish.

“What happens is the juvenile fish come in from their larval stages out at sea and settle in the seaweed. They will undergo the first part of their lifecycle in the seaweed where they grow and become healthy before moving on to the coral reef as adult fish.

“The seaweed and the coral are interdependent parts of the seascape.”

“The problem is that seaweed areas are neglected in research – coral is somehow more charismatic and fancy,” she says. “But since they both affect each other, you need to look at surrounding seaweed areas to be able to protect and preserve a healthy coral reef ecosystem.”

The ANU research findings have fed into WA Parks and Wildlife reef management to ensure the appropriate fish habitats are protected for the benefit of the total ecosystem and, by extension, visitors.

The research has also facilitated the forecasting of good or bad years for fish numbers.

“Seaweed meadows are dynamic and change according to climatic conditions,” Fulton explains. “They can look very different from one location to the next, one year to the next.

“Those two things together have allowed us to predict the future population size of these fishes through time, which is very handy if you want to sustainably manage and conserve this ecosystem.”

Ningaloo might have come into its own as a tourist destination and research site, but when it comes to conservation strategies like this, there’s still reason to look to its more famous east-coast counterpart – for warning signs.

“Ningaloo faces many threats that could fundamentally change it overnight, not unlike the mass bleaching in 2016–2017 that wiped out so much of the live coral on the Great Barrier Reef,” Fulton says.

“So far at Ningaloo we’ve been lucky in that we’ve had some bleaching events and some catastrophic loss of habitat, but Ningaloo’s been able to bounce back. This is due in no small part to the outstanding work of the scientists and managers who understand this system better and better each year, so we’re able to look ahead, and prepare for potential disturbances that threaten Ningaloo.”

He says seeing what has happened to the Great Barrier Reef makes him ‘physically sick’ and motivates him to keep making the long trip from Canberra to Ningaloo.

“Ningaloo has certainly got into my heart in the last 10 years”, he says.

“I want to do my very best to provide the world-class information we need to adaptively and sustainably manage this ecosystem for the next generation, including my daughter, my grandchildren and everyone else’s.”