» News & events » News » How does the crested pigeon make their mysterious alarm sound? 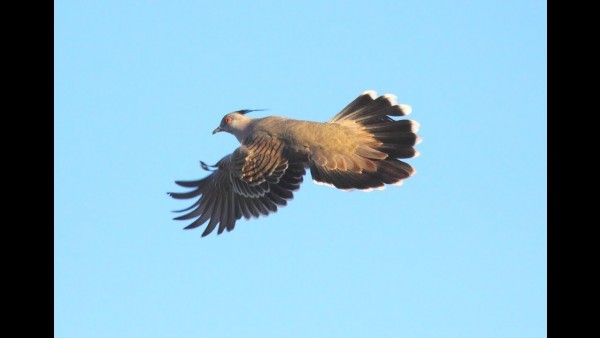 Scientist have solved the mystery of how crested pigeons create an alarm without using their voice to prompt other birds to flee danger.

Researchers have long suspected that some pigeons raise an alarm using their wings. But new research from The Australian National University (ANU) has for the first time discovered the crested pigeon uses a modified feather to sound the alarm.

Postdoctoral Fellow Dr Trevor Murray from the ANU Research School of Biology said the modified feather, the 8th primary, which is unusually narrow, produces the high note of the alarm which prompts other pigeons to flee danger.

“The unusual feather appears not only to have evolved for sound production, but it is also necessary for other crested pigeons to treat the sound as an alarm,” said Dr Murray.

“The 8th primary feather is half the width of neighbouring feathers, which is unusual even among related species.”

Dr Murray said this non-vocal alarm was reliable and the only way it could be produced is when a pigeon flees.

“The acoustic features which identify the alarm are the result of birds trying to escape danger. They flap their wings faster and produce a faster, louder sound when fleeing,” Dr Murray said.

“Together these findings tell us that this sound is a signal, rather than a cue of danger, and it is an innately reliable one since the act of fleeing itself produces the alarm.”

The research was published in the journal Current Biology.

Images and video are available for download at dropbox https://www.dropbox.com/sh/zgtgf35s84f0g8d/AADift0d6257TBVS4fBgiOQ9a?dl=0.

For media assistance, contact Kate Prestt on the ANU media hotline on 02 6125 7979 or email media@anu.edu.au