Studying pathogen proteins that cause disease 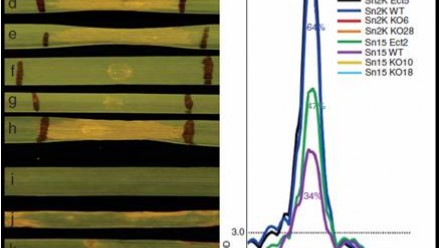 Effector proteins cause disease! How do they do it?

We have recently shown that S. nodorum produces proteins (knownn as effectors) that have a significant role in causing disease. These proteins appear to be secreted by the fungus during the very early stages of infection and internalised within the wheat host cells. Inside the host cells, the proteins then interact with the wheat host via a gene-for-gene interaction by an as yet undetermined undergo a  with corresponding host genes which results in disease. The molecular basis of this interaction is unknown. Studies to date with collaborators have identified three host specific toxins, ToxA, Tox1 and Tox3.

Multiple projects are available in the following areas to study these effector proteins further (skills gained in these projects are shown in brackets);

Papers to emerge from this project include: