Identification of signal transduction and accessory protein requirements for resistance responses mediated by the tomato I gene for Fusarium wilt resistance. 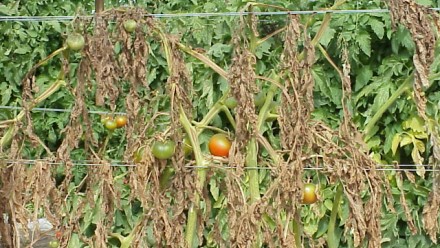 The fungus Fusarium oxysporum causes devastating wilt diseases of many important crop plants including banana/plantain, cotton, potato, tomato, capsicum, beans, peas, chickpeas and melons. However, individual pathogenic isolates of F. oxysporum are highly specific for a particular species of host plant. For example, F. oxysporum f. sp. cubense (Foc) is specific for banana/plantain, F. oxysporum f. sp. vasinfectum (Fov) is specific for cotton and F. oxysporum f. sp. lycopersici (Fol) is specific for tomato. In Australia, Panama disease caused by Foc topical race 4 (TR4) has largely destroyed the banana industry in the Northern Territory and now poses a serious threat to the banana industry in Queensland following an outbreak in 2015 and another in 2017. Worldwide, Foc TR4 now threatens plantains, a staple food crop for millions throughout the subtropics and tropics, especially Africa, as well as large-scale banana production in the western hemisphere. In contrast to Fusarium wilt of banana, Fusarium wilt of tomato (caused by Fol) has been managed for many years by breeding for disease resistant cultivars, but this approach to Fusarium wilt control is not available for many crop plants. In addition to its importance as a crop pathosystem, the tomato/Fol pathosystem is an important, well-established model system for the study of both compatible and incompatible plant/F. oxysporum interactions.

Tomato has several immunity (I) genes that enable it to recognise and respond to Fol isolates carrying the corresponding avirulence (Avr) genes. Three Fol Avr genes have been identified to date (Avr1, Avr2 and Avr3). The proteins encoded by these were initially identified as small proteins secreted in the xylem sap of infected tomato plants. These proteins, designated SIX (secreted in the xylem) proteins, serve as disease effectors that promote pathogen infection in susceptible tomato plants but in the case of SIX4 (=Avr1), SIX3 (=Avr2) and SIX1 (=Avr3) trigger defence activation in resistant plants. Fifteen genes encoding SIX proteins (SIX1 to SIX15) have been identified to date.

Four tomato genes for resistance to Fol have been isolated to date (I, I-2, I-3 and I-7), and three of these (I, I-3 and I-7) were isolated in the Jones Laboratory (Catanzariti et al., 2015; Gonzalez-Cendales et al., 2016; Catanzariti et al., in preparation). I and I-7 encode leucine-rich repeat (LRR) receptor-like proteins (RLPs) and, like the tomato Ve1 gene for Verticillium wilt resistance and the Cf-4 and Cf-9 genes for leaf mould resistance, require a lipase-like protein EDS1 for normal resistance function (Hu et al., 2005; Gonzalez-Cendales et al., 2016). The I gene also requires the LRR receptor-like kinase (RLK) proteins BAK1 and SOBIR1 for normal resistance function (Catanzariti et al., in preparation). The main objective of this project is to test the requirements for other signal transduction or accessory proteins in resistance responses mediated by the I gene. These objectives will be achieved by using a combination of agroinfiltration and virus-induced gene silencing (VIGS), and will make use of the observation that co-expression of I and Avr1 in the leaves of Nicotiana benthamiana via agroinfiltration results in a necrotic response that phenocopies the hypersensitive response (HR) normally triggered by an incompatible interaction between plant and pathogen. VIGS based in tobacco rattle virus (TRV) has been a very effective tool for studying resistance protein/avirulence protein interaction in N. benthamiana.

Specifically this project will:

1. Identify N. benthamiana orthologues of target genes encoding signal transduction or accessory proteins such as ACIF1, BIK1, BON1, CDPK1, CMPG1, FER, IOS1, MEK2, MPK6, PCRK1, PCRK2, PLC4, SGT1 and WRK70, which have variously been shown to be required for the function of some other LRR-RLPs (Ve1, Cf-4 or Cf-9).

3. Test the VIGS constructs for ability to suppress the necrotic response induced by co-expression of I and Avr1 in N. benthamiana.

4. Cross transgenic Arabidopsis thaliana plants carrying the I gene to A. thaliana lines carrying T-DNA insertions in genes involved in resistance, but not necessarily contributing to an HR, to test the roles of these genes in I-mediated resistance to Fusarium wilt in A. thaliana. F2 plants will be inoculated with Fusarium oxysporum  isolate Fo5176, which  carries a gene encoding an Avr1 variant that triggers necrosis when co-expressed with I in N. benthamiana. Screening for resistance to Fo5176 will be carried out in collaboration with Dr Louise Thatcher, CSIRO Agriculture and Food, Centre for Environment and Life Sciences, Wembley, Western Australia.

This project is open to Honours and Masters students