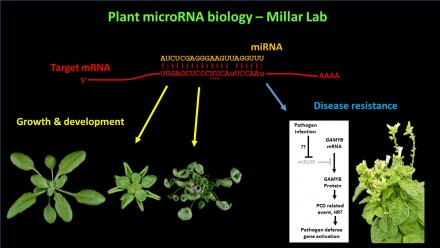 We have a series of projects that centre around a small regulatory microRNA called miR159 that confers endogenous gene silencing. MiR159 is ancient and highly conserved, being present in all land plants where it regulates the expression of a family of genes encoding GAMYB transcription factors. GAMYB promotes programmed cell death (PCD) in seeds and anthers, and although GAMYB is strongly and ubiquitously transcribed in vegetative tissues, its expression is fully silenced by miR159.

Recently we have shown that inhibition of miR159 via MIMIC technology in the model plant tobacco, results in the activation of GAMYB expression, which in turn activates a plethora of genes involved in plant defense pathways. These MIMIC tobacco plants were subsequently shown to be highly resistant to the plant pathogen, Phytophthora. This demonstrates in tobacco that the miR159-GAMYB pathway is a post-transcriptional regulatory mechanism controlling plant defense pathways.

We have projects that aims to address one or more of the following questions.