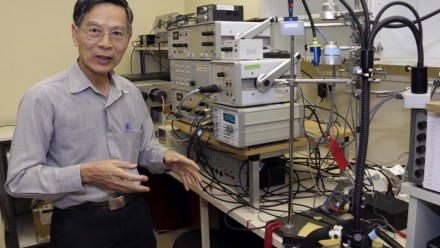 From an early age, Professor Fred Chow wondered how plant science could be used to solve famine, learning from the horror that affected his country of birth and his family in a devastating way.

“It was really my childhood that got me interested in photosynthesis, although we learnt very little about it in school. The famine in China left a lasting impression on me. I think it was probably in the back of my mind as a teenager, even before coming to Australia, that I wanted to study photosynthesis one day,” he remembers.

According to the best estimate, 38 million people died during what was called the Great Leap Forward, causing a nationwide famine in China.

“The Chinese government took labour away from agriculture to work on steel production, which inflated all the agriculture production figures, and this simply meant that soon there was not enough food for everyone,” he says.

Chow was born after the Second World War in southern China, in a very poor, overpopulated region. His father, as many men of his generation, left the family when Chow was just one month old to work overseas and send money back to his family. All the children were raised by his mother, and the next time he saw his father wasn’t until 1960. “He was a stranger, really,” he says.

However, this stranger made a decision that meant Chow embarked on a very different life path to other members of his family: he decided to send his youngest son to Australia.

“It was not a Colombo Plan but a Father’s Plan! Probably in the hope I would one day study medicine or something like that”, he says. “What I did not tell my father was that I also had a plan: I wanted to study the way plants convert the energy from sunlight into chemical energy.”

Chow arrived in Tasmania in 1966. Almost immediately he was hooked on photosynthesis, and the problem that has occupied his entire scientific career: how leaves use the powerful energy that results from splitting water molecules during the process of photosynthesis.

“When I finished my undergraduate studies, I applied for one scholarship at Flinders University and thought that if I didn’t get it I was going to study teaching or electronics. But I was successful and started my PhD in 1972. I was aware it was going to be a tough career, and it has been always mostly on a knife edge; you have to be really interested to go into research, because ultimately satisfying that interest may be the main reward.”

Photosynthesis hasn’t stopped providing Professor Chow with that reward for over 40 years.

“It is enormously rewarding to uncover small pieces of this complex jigsaw puzzle called photosynthesis. It’s considered to be the most important process on Earth as it sustains nearly all life, produces oxygen and in turn gives rise to the ozone that protects us from the Sun’s ultraviolet radiation.”

The focus of his research is investigating how photosynthetic machinery is organised, and how that impacts on photosynthetic performance. “In a nutshell, I am interested in how a leaf makes use of the electrons and protons that are released after the water molecule is split, which ultimately drives the conversion of sunlight into chemical energy.”

Chow recently retired from ANU after many years.

“I will continue investigating and remain associated with research. ANU is a really exciting place to be for a plant scientist. The strength of the University’s research in photosynthesis is that we deal with processes over a very large range of scales; both a very big spatial and very big temporal range of scales. From the canopy, to the leaf to the green particles in the leaf and inside those particles, at the molecular level.

Chow smiles when asked what he does outside his research.

“Research has dominated most things in my life, other than that, of course my family, and I used to run a weekend Chinese language school in the ACT voluntarily for 16 years. I also used to compete in middle level competition table tennis for quite a number of years, but now I play against other seniors socially.

“Over the past decade, my wife and I have been travelling quite a bit, usually combining sightseeing with visits to a number of labs scattered through China – from where I first came. The rest of my life has been dedicated to photosynthesis.”

Professor Fred Chow undertakes his research at the ARC Centre of Excellence for Translational Photosynthesis, based at The Australian National University. This profile was originally published on their website, in March 2017. 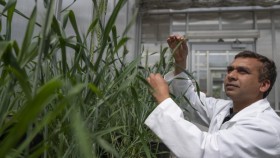