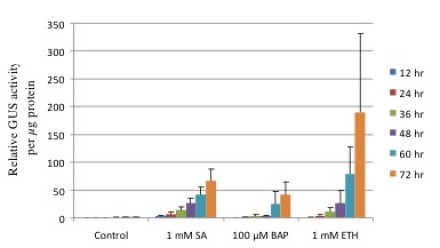 Transient gene expression via agroinfiltration of tobacco leaves has been used to study the interaction between many different resistance (R) proteins and their cognate avirulence (Avr) proteins. In this assay system, R protein activation and downstream signalling results in leaf necrosis, a threshold phenotype that is not well suited to quantification of signal strength. Nor is this assay system suited to the analysis of phytohormone and other signalling pathways that underpin the defence response but do not result in necrosis. A transgenic PR-5 (pathogenesis-related protein-5 E22) promoter: GUS (β-glucuronidase) reporter system has been developed in the Jones laboratory to enable quantitative measurement of defence activation occurring at or below the threshold for necrosis in agroinfiltration assays. In this reporter system, reporter activation is measured in leaf discs (harvested after agroinfiltration) using a MUG (4-methyl-umbelliferyl-β-D-glucuronide)-based fluorescence plate assay to measure β-glucuronidase activity. As expected, β-glucuronidase activity was induced by R/Avr protein interaction and consistent with the presence of salicylic acid (SA), ethylene (ET) and cytokinin (CK) responsive elements in the E22 promoter, β-glucuronidase activity was induced rapidly by SA and ethylene ET, more slowly by CK, but not at all by jasmonic acid (JA). However, JA was found to suppress activation by SA. Salt stress was also found to induce β-glucuronidase activity consistent with the presence of salt responsive elements in the E22 promoter. The E22 promoter also contains abscisic acid (ABA) and drought responsive elements but these have not yet been investigated. The possibility of synergistic or antagonistic crosstalk between phytohormone signalling pathways affecting E22:GUS reporter induction has also not been investigated, apart from the antagonistic interaction between JA and SA and an additive (possibly synergistic) interaction between CK and SA.

The proposed project will use the E22:GUS reporter line to further investigate the role of phytohormones, abiotic stress and pathogen elicitors and effectors in inducing or suppressing defence response activation as follows:

1) test E22:GUS reporter gene activation following infiltration of a bacterial flagellin elicitor-active peptide (flg22) over a time course and at various concentrations of flg22 to establish a suitable combination for assaying suppression of flg22-induced defence response by pathogen effectors

4) make a kinase activation mutant of the tomato I-3 gene for resistance to fusarium wilt by site-directed mutagenesis and test for E22:GUS reporter gene activation following agroinfiltration. If reporter gene expression is induced then test induction over a time course and at various concentrations of Agrobacterium tumefaciens

7) test the ability of the I resistance gene to induce E22:GUS reporter gene activation following recognition of Avr1

These assays will provide valuable experience in the use of GUS reporter gene assays to study defence activation and pathogen attack. They will also provide technical expertise with the MUG-based fluorescence assay, transient gene expression via agroinfiltration and site-directed mutagenesis, and convey an understanding of the two main tiers of plant disease resistance (PTI and ETI), including the roles of phytohormones in plant defence, as well as the mechanisms that pathogens use to overcome these defences.