Biologically inspired membranes for the efficient desalination of water 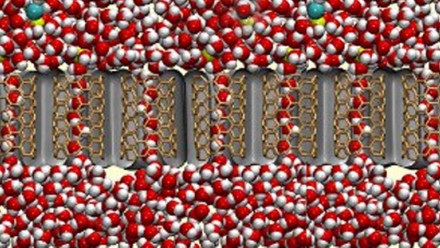 Reducing the cost of seawater desalination by copying the action of cell membranes.

Desalination of sea water via reverse osmosis is an attractive means of obtaining potable water, but one of its main drawbacks is the energy and cost required to force the water through semipermeable membranes that block the passage of the salt. The energy costs could be reduced, however, if new membranes could be developed with continuous pores that offer less resistance to water. Many narrow biological pores do just this: a pore of a given radius surrounded by non-polar atoms can allow for water to pass, but impede the passage of ions. Research in the group has shown that membranes formed from synthetic pores that mimic these biological channels, such as carbon nanotubes, can be used in desalination.

Ongoing work is helping to improve the design of these membranes, determining how efficient they can really be, as well as assessing whether they can be used to aid the removal of toxic contaminants from water supplies.