With wines travelling through the Suez Canal at 50˚C air temperature, the bottles at the top are really going to cop it.

When he’s not busy solving the global food crisis, Dr Peter Solomon of the Research School of Biology at ANU is ensuring that your chosen tipple arrives in peak condition.

But how did a wheat disease expert come to publish a paper on wine shipping conditions? The idea grew from a casual chat with colleagues one happy hour, says Solomon.

“We talked, almost jokingly, about what would happen to wines [travelling] across the equator,” he says. The discussion (which, you guessed it, was held over a glass of wine) stemmed into a serious research project.

The study, involving collaborators at Murdoch University, CSIRO and the University of California, simulated wine shipping conditions based on previous findings that the ambient temperature of refrigerated shipping containers can fluctuate up to 13˚C over a day.

To test what effect this might have on the precious cargo, the team stored a selection of red and white wines for three weeks at either 20˚C (to reflect room temperature), 40˚C (to reflect ambient temperature at the equator), or an alternating 40˚C/20˚C cycle (to simulate day and night).

More unusually, the remaining bottles were stashed in the boot of a car and chauffeured around California for the same period.

Following this faux journey, an expert panel were enlisted to sample the wine. Their palettes were prepped with sensory standards, from typical red berry flavours to canned vegetable through cardboard, before assessing the real thing.

Although the red varieties weren’t much affected by the higher temps, the whites wilted in the heat, says Solomon. “The white wines in the 40˚C conditions had significantly increased diesel, oxidised and burnt rubber aromas. At the same time, they lost that sweetness and fruitiness you’d associate with a good, crisp Sav Blanc.”

Solomon thinks these findings are likely to cross over to the real world, especially given that heat becomes concentrated just beneath the sun-exposed roof of a shipping container.

“With wines travelling through the Suez Canal at 50˚C air temperature, for example, the bottles at the top are really going to cop it. You could open two bottles of wine, one from the top, the other from the bottom, and they could be vastly different to the point that you think, ‘My god, one of these is off’.”

The team also analysed the chemical composition of the ‘gas’ that emanates from wine and imparts most of the flavour. Through correlation of their results with those of the tasting panel, they have identified a few tell-tale compounds that can be tested for, ensuring that the bottle you pluck off the supermarket shelf is without that hint of burnt rubber.

It might not be so bad though, as Solomon – something of a wine aficionado himself – acknowledges. “Some people may like the diesel; it all comes down to personal preference.” But something all wine lovers could agree on: what better companion to a glass of red than a fresh loaf of bread?

This is where Solomon’s main area of research comes in. He studies a fungal disease that decimates $100 million worth of Australian wheat every year. With the global population set to boom (an extra 2.2 billion inhabitants are expected by 2050), the battle to beat crop disease is becoming urgent.

Until recently, this fungal pathogen, Stagonospora nodorum, was considered pretty simplistic; but thanks to Solomon we now know some of the clever tricks it uses to manipulate its wheat host. “This particular fungus requires a dead or dying host: it needs to kill the host and then feed off the nutrients from the dying cells,” he explains.

Once the fungus has infiltrated the leaf, it deploys a battery of proteins known as ‘effectors’. These effectors trick the plant into killing off the infected appendage, providing the fungus with a nutritious, composted food source.

There is, however, more to the story. The only way the invaders can trigger the plant’s death response is by interacting with a corresponding plant protein known as a ‘host susceptibility protein’. If the plant does not have this protein, disease does not occur.

This knowledge has led to important practical applications. Solomon now supplies commercial wheat breeders with purified effector protein to identify and exclude susceptible plants. “By infiltrating the effectors into their breeding lines, they can identify the lines that are susceptible to disease and remove them. It’s being seen as a very significant success,” he says.

Intriguingly, these host susceptibility proteins seem to have no other function than to betray the plant by fraternising with the enemy. In an evolutionary sense, this is completely counterintuitive, says Solomon.

The explanation may lie in the fact that other fungal wheat pathogens require their host to be alive, he says. “One way that plants have evolved resistance to pathogens that require a living host is to kill the infected area, depriving the pathogen of the [living] nutrients.”

Hence, what are now considered susceptibility proteins may once have provided the plant with resistance to other fungi.

“S. nodorum has hijacked these proteins and said to the host ‘Well, here I am, go and kill yourself’. The host does, thinking ‘Ha, I’ve got you’ and the fungus thinks, ‘No, dead tissue is exactly what I want’,” explains Solomon. “We’re working on this theory at the moment and evidence is starting to stack up that this might be the case.” 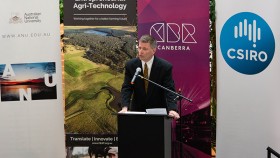 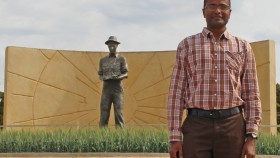