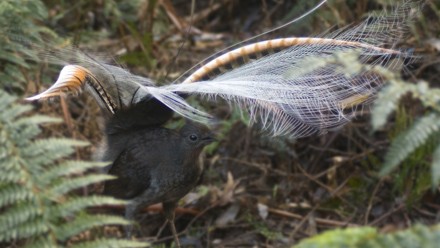 We study the acoustic accuracy, context and possible functions of avian vocal mimicry.

Many bird mimic the calls or songs of other species, but in most cases we do not know the function of such mimicry. Mimicry is sometimes thought be mistaken copying of other species sounds, as a non-adaptive side effect of the mechanism of learning conspecific songs. Our recent review suggests otherwise, and suggests many avenues for research. We have examined the acoustic accuracy, context and possible functions of mimicry. Field studies include superb lyrebirds, one of the world’s most celebrated mimics, and brown thornbills, perhaps the world’s least celebrated mimic - at least until recently! The work on lyrebirds has also revealed a remarkably complex song-and-dance display, in which repertoires of song are coordinated with repertoires of dance moves. Currently, I'm involved in a recently started project on Albert's lyrebirds, with Justin Welbergen, Anastasia Dalziell & Fiona Backhouse (Western Sydney University).

This project is open to PhD students