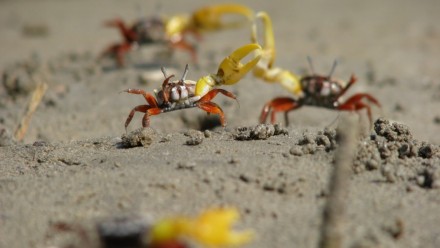 Synchronised movements are extremely common in many animals.  Synchrony is a key element of human dance and music; and our heart muscle cells contract in synchrony to facilitate each heartbeat. Fish schools turn in synchrony. Many birds fly in synchronous twists and swirls. Synchronised movements are almost always a co-operative behaviour in which each individual benefits by being in synch with others. In the fiddler crabs of Darwin, however, males wave in synchrony when they are trying to attract a female for mating; and this behaviour is NOT co-operative. It is, in fact, competitive. Males compete with each other to wave before other males (because females have a strong preference for leading waves). This project looks at the differences between cooperative and competitive synchrony in many systems, including the fiddler crabs of Darwin harbour.