» News & events » News » These koalas escaped disaster. Now they are getting a second chance.

These koalas escaped disaster. Now they are getting a second chance. 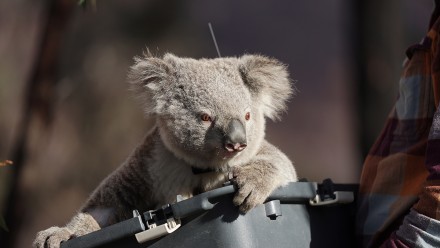 As I travel to the koala sanctuary at Two Thumbs Wildlife Trust, I can’t escape the memories of last summer. We all carry these unspeakable memories now, of what happened to the koalas in the drought and subsequent bushfires.

These images stay with me even as I arrive at the sanctuary, two hours south of Canberra. Here, I meet a group of ANU biologists who have been working to rehabilitate koalas rescued after the Good Good fire obliterated their habitat in January 2020. 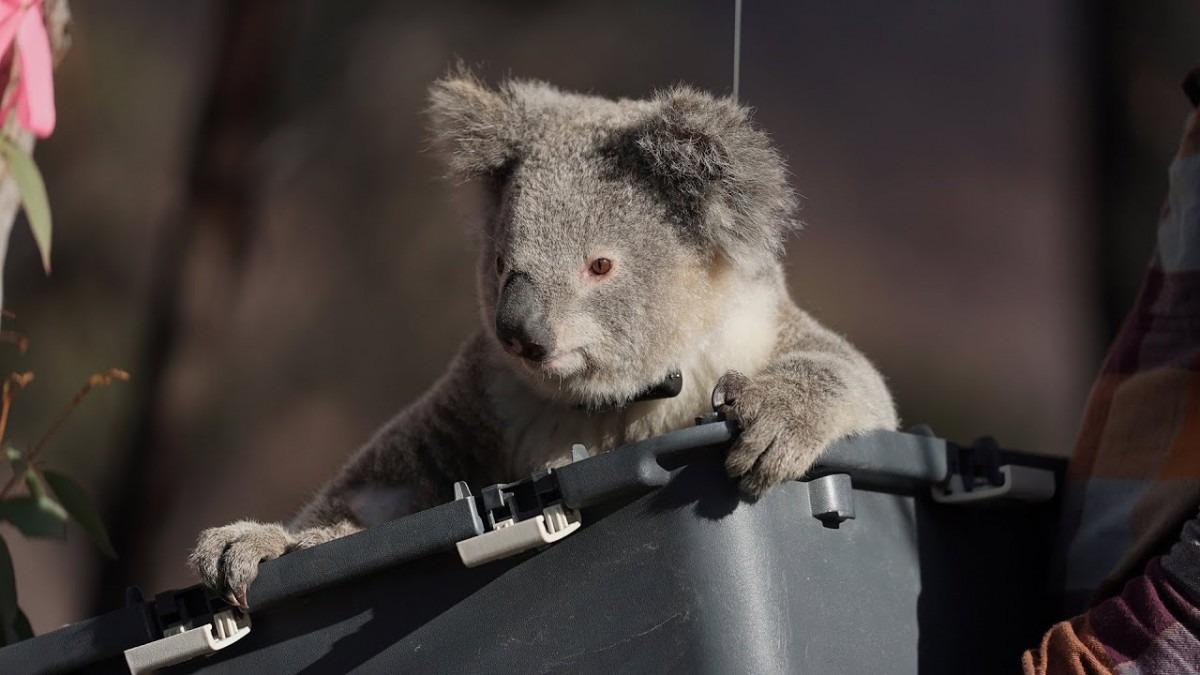 Watch the video: Hamish and Bear return to the wild

It’s now July. Five months have passed since the fire engulfed the property where I’m standing. Blackened trees are scattered across the barren landscape. Undergrowth is scarce. It’s hardly a place where you’d expect to see healthy wildlife.

And then I see Hamish. I don’t mean to be rude, but Hamish is really, surprisingly fat. And fluffy. And munching on fresh eucalypt leaves. Hamish is what our mental picture of a koala should be. He has had undergone a remarkable recovery. When Hamish was rescued, his rescuers described him as ‘emaciated.’ He weighed only 4.9kg.

Like many other koalas across the country, Hamish was already in bad shape before the fires even arrived. Prolonged heat stress and drought had left his habitat desiccated. Specialists stepped in to rescue the koalas that were facing starvation.

Heat-sensitive drones were used to identify surviving koalas and a sniffer dog named Bear was brought in from the University of the Sunshine Coast to find their precise location. When Hamish was rescued from a tree, its location was recorded, and he was taken to the Australian National University for short-term, intensive care. From there, Hamish moved to a purpose built rehabilitation facility before his release.

Over the past five months Hamish has had regular health checks, his enclosure cleaned daily and stocked with fresh leaves and his recovery closely monitored by a team of ANU specialists. 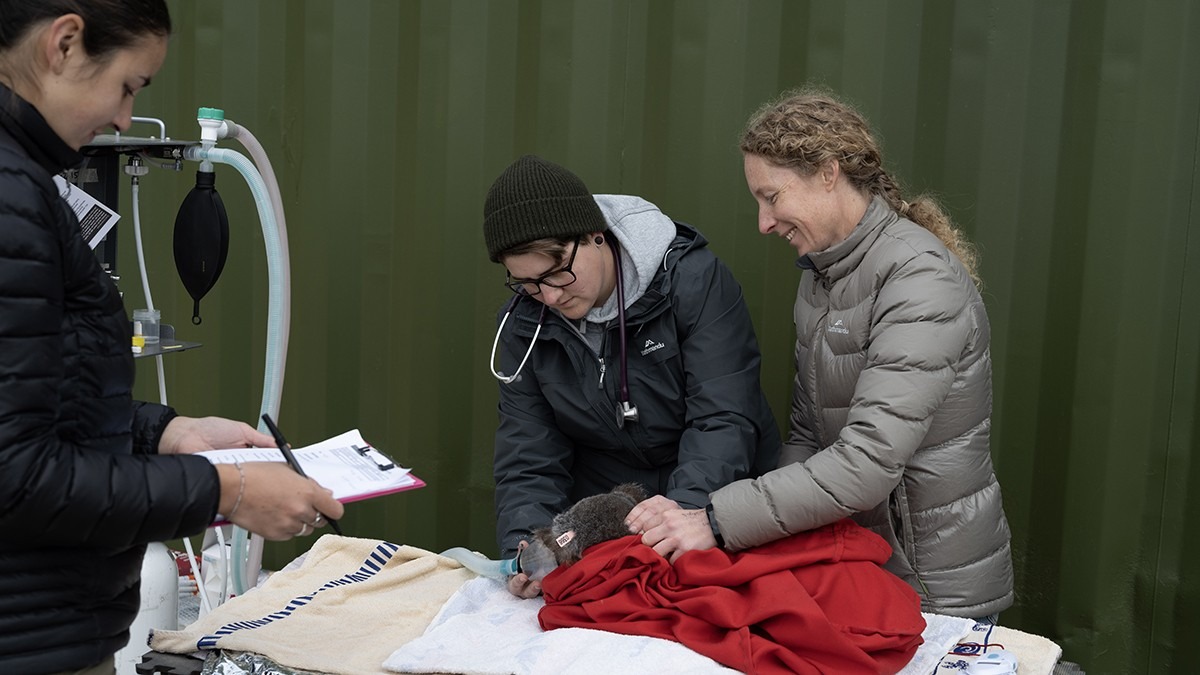 Today is a big day for Hamish. He will undergo a thorough veterinary inspection which will assess his body condition, blood samples, heart rate and weight. If he passes, he will have a radio collar attached, and he will be returned to the tree from which he was rescued.

Hamish’s rotund body is placed gently on the examination table, where he’s hooked up to a facemask providing anesthetic for the duration of the examination.

Hamish passes all his tests. Since his rescue, he has returned to a much healthier weight of 7.9kg. The final step is to attach a radio transmitter. This transmitter will play a critical role for the future management of koalas in the region. It will provide data that will inform how koala populations are managed post-bushfire.

Dr Karen Ford from the ANU Research School of Biology explains how the data will improve koala rehabilitation.

“We want to return the koalas to the wild as soon as they are healthy enough to do so and the habitat has recovered sufficiently to support them. This gives them the best chance of long-term survival,” she says.

“The problem is that this past summer and the 2020 bushfires destroyed so much of these koalas’ habitat. We don’t know if the trees have been given long enough to regenerate.”

The radio transmitters record the koalas’ movements, and tell researchers which parts of the landscape the koalas are inhabiting. The transmitters will also help the team easily locate the koalas for subsequent health checks. Survival of rehabilitated koalas is critical to ensuring that the populations are not diminished. 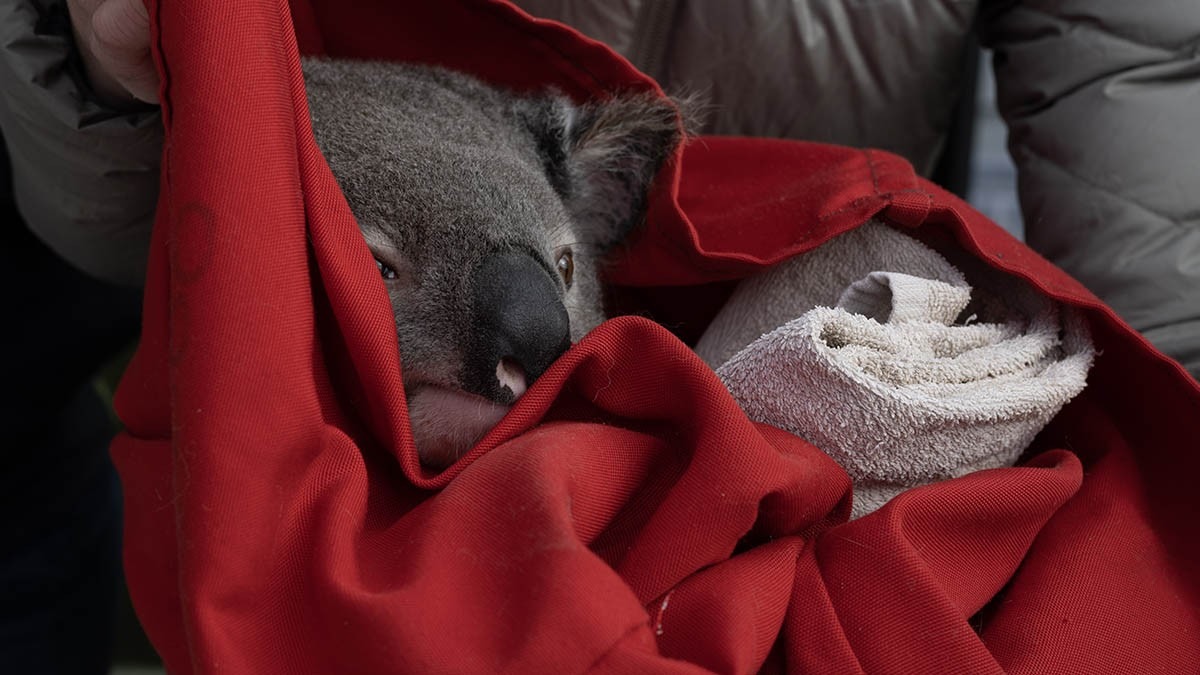 Having passed his veterinary examination, Hamish is prepared for his release

Today, two koalas are scheduled for release. Veterinarian Jelena Vukcevic completes the examinations and prepares them for release. We load the koalas into the back of the four wheel drives and head onto the range.

Hamish is the first to be released. His capsule is placed beside the tree from which he was rescued five months ago. On that day the landscape was an inferno. Today there are signs of regeneration, with fresh growth sprouting from the charred tree trunks. 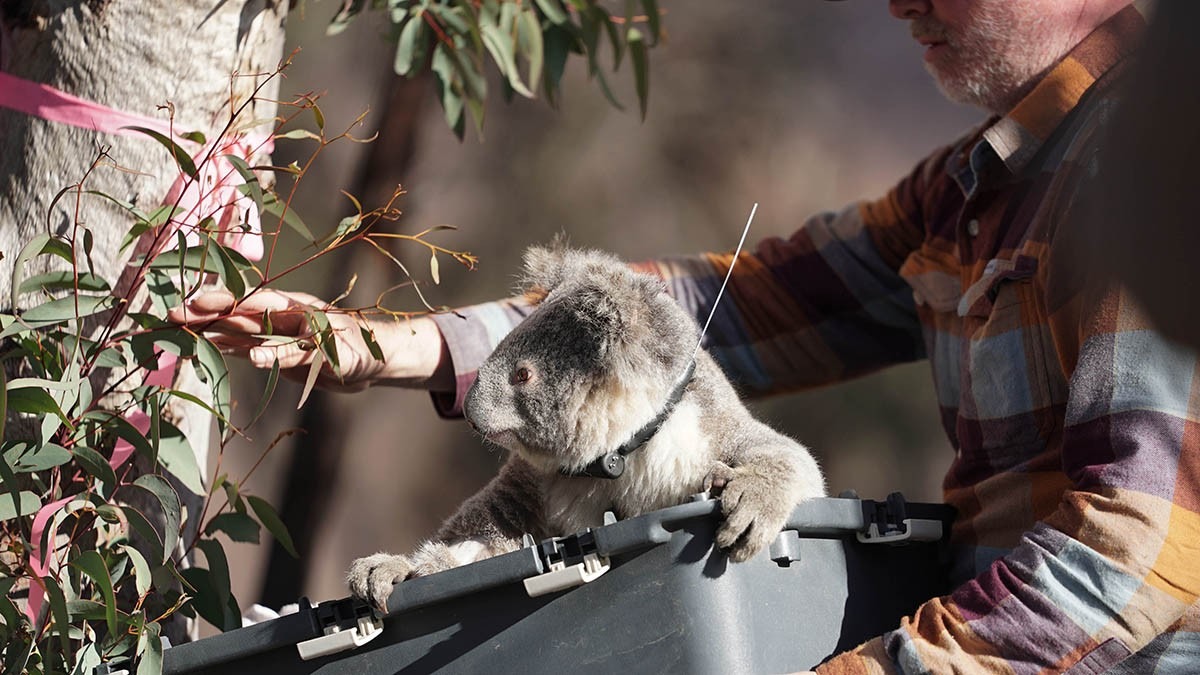 Hamish is released at the Two Thumbs Wilflife Trust Sanctuary

The lid is lifted and Hamish takes in his surroundings. As he climbs upward I look back at the team who have nursed him back to health. Their faces show relief. But I can see their elation is tempered. Later, I ask Dr Ford how she felt.

“Seeing them go back into the wild is wonderful.

“The question now is whether they will survive in this altered landscape and whether the landscape will be able to recover sufficiently to remain a home for koalas in the future.”

This article is republished from ANU College of Science under a Creative Commons license. Read the original article.