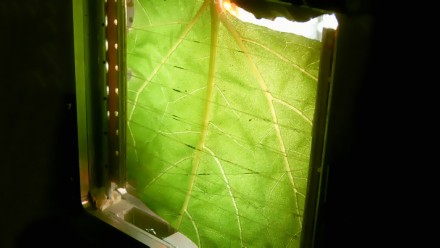 Each year, global leaf respiration-dependent metabolism liberates into the atmosphere nearly 30 gigatons of CO2 (2% of the atmospheric CO2 budget) as a waste product and a considerable amount of NH3 and H2S. At the plant scale, the impact of respiration on carbon balance and growth is still not easily quantifiable since respiration is both detrimental to plant biomass production (due to CO2 loss) and beneficial for nutrient (such as nitrogen and sulphur) assimilation. Up to now, attempts to understand the net effect of respiratory metabolism or to optimize carbon gain by suppressing respiration have been rather unsuccessful. Furthermore, the technical difficulty to measure respiratory fluxes when photosynthesis concurrently occurs, as well as the complexity of interactions between respiration, photosynthesis, photorespiration and other metabolisms have impeded significant progress in the past decades. Many uncertainties thus remain about respiratory function in photosynthetic organs, such as fundamental flux schemes that describe respiratory metabolism and metabolic interactions involving respiration, the effect of respiration on carbon and isotopic mass-balance and possible robust relationships between respiratory metabolism and practical ecophysiological traits. In the research project, we intend to understand respiratory metabolic commitments and regulations and how they respond to environmental conditions such as CO2 or O2 concentration and thus the rate of photorespiration.