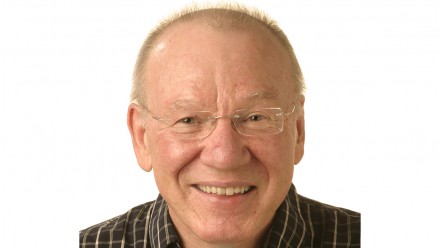 Tom Wydrzynski was born in St Louis, Missouri, USA and graduated in 1969 with biology and chemistry from the University of Missouri, St Louis. He then studied plant physiology at Queens University, Kingston, Ontario, Canada, before completing his PhD in Botany at the University of Illinois, Urbana-Champaign in 1977. Through his subsequent research on physical biochemical aspects of photosynthesis in the USA (Urbana and Berkeley), Germany (Berlin), Japan (RIKEN, Wako-Shi), Sweden (Gothenburg) and Russia (Pushchino), Tom built a stellar, internationally regarded career that was consolidated in ANU.

His review on the structure and catalytic mechanism of the water splitting, O2 evolving apparatus in photosystem II (Hansson and Wydrzynski; Photosynthesis Research 1990; 23, 131-62) caught the attention of Barry Osmond, Director-elect of RSBS.  In 1991 Tom was recruited to the Director’s Research Unit to strengthen Australian research in the primary O2 evolving steps of photosynthesis. Tom brought Johannes Messinger to RSBS on an ARC post doc and with Murray Badger they devised a mass spectrometer inlet system that improved the kinetic resolution of substrate water isotope exchange measurements a thousand-fold (Messinger et al. PNAS 1995; 92, 3209-13). With this new technique, they demonstrated, for the first time, that both substrate water molecules are bound in chemically different environments of the catalytic site for water oxidation in photosynthesis.

Largely on the basis of this work, and to the great delight of Tom, Johannes received the inaugural Robin Hill award for research into the light reactions of photosynthesis from the International Society of Photosynthesis Research. The late Warwick Hiller and other students of Tom continued to derive unique data on the mechanism of water oxidation that refined thinking in photosynthesis research around the world. Subsequently, after nine publications with Tom, Warwick also shared the triennial Hill award. As head of the group renamed Photobioenergetics, and strengthened by the move of Jan Anderson and Fred Chow from CSIRO, Tom forged strong links with the Department of Chemistry in the Faculties (Ron Pace) and RSC (Elmers Krausz).

More recently, Tom turned his attention to engineering of synthetic proteins that mimic light capture in antenna pigments of the photosynthetic apparatus to redox-active components. Notably, PhD student Sam Hay showed electron transfer from a bound photoactive pigment to an attached quinone within an engineered protein (Hay et al. PNAS 2004; 101, 17675- 80) and again put Tom’s lab in the spotlight of an exciting new research field. Tom retired from ANU in 2011 and moved back to St Louis, but remained as a Visiting Fellow in RSB until August 2017. The widespread appreciation of Tom’s achievement is evident in the recollections of colleagues collected and published by his PhD supervisor and mentor Govindjee (Photosynthesis Research 2008; 98, 13-31). Tom was a good friend, and mentor to his students throughout the years and provided many opportunities for them to progress their careers in science. He will be fondly remembered and sadly missed by those who knew him.