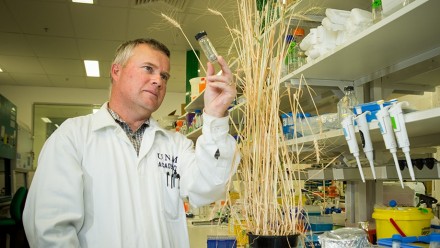 Researchers have unraveled the mystery cause of the emerging wheat disease White Grain Disorder.

Scientists at the Wheat Biosecurity Laboratory in the Research School of Biology identified the cause of the disease when they isolated three previously undiscovered fungi from infected wheat samples and sequenced their genomes.

"Until now, growers and pathologists have recognised the symptoms of White Grain Disorder, but they haven't known what causes it," said lead researcher Associate Professor Peter Solomon from the Research School of Biology.

"This finding now provides all stakeholders with confidence in what they are dealing with in the field."

Australian wheat exports are worth more than $6 billion a year with diseases costing the industry around $1 billion a year. White Grain Disorder emerged about 20 years ago and has sporadically affected crops in Southern Queensland and South Australia, but until now has been poorly understood.

"This is an important advance to the field, as it can be difficult to manage diseases when you don't know what causes them. This study is crucial to our ability to manage this disease in the future," Associate Professor Solomon said.

"Growers who have invested heavily in their crops for the growing season can now have confidence of knowing what the pathogens are behind the disease and what they can do about it."

The team found the disease is caused by three previously unidentified fungi, which occur in different proportions in different diseased areas, although they produce identical symptoms.

The study, a collaboration between ANU, the Department of Agriculture, Fisheries and Forestry in QLD and the South Australian Research and Development Institute, is published in the journal Australasian Plant Pathology.