» News & events » News » How to put together a fast carbon-capturing engine: lessons from blue-green algae

A scientific breakthrough intended to help boost the yields of food crops – such as wheat, cowpeas and cassava – has solved a long-standing question of how cyanobacteria, known as blue-green algae, builds the carbon-capturing engines called carboxysomes in a protein liquid droplet formation.

Scientists from The Australian National University (ANU) and the Max Planck Institute of Biochemistry in Germany revealed that blue-green algae produces tiny carbon-capturing engines akin to the way blobs form in a lava lamp and liquid protein droplets, which curiously  also form in the development Alzheimer’s disease.

Carboxysomes are responsible for making blue-green algae extremely efficient at transforming carbon dioxide into energy-rich sugars – three times faster than crop plants. Computer models have shown that upgrading plant photosynthesis to use the same mechanism in blue-green algae will lead to dramatic increases in plant growth and yield.

“Crop breeding in agriculture has hit a road-block in terms of achieving gains in food production,” said Dr Long from the ANU Research School of Biology and the ARC Centre of Excellence for Translational Photosynthesis.

“We need to double food production to meet demand in 2050, so we need to focus on engineering super crops able to feed the growing populations around the world.”

Dr Long said the team’s work was focused on eventually being able to transplant these blue-green algae carboxysomes into important crop plants to help them capture carbon more efficiently and to increase yields.

He said the study’s findings could also lead to other exciting outcomes.

“Protein liquid droplet formation appears to play a very important role in a number of neurodegenerative diseases such as Alzheimer’s,” he said.

“Understanding how this phenomenon works in these cyanobacterial systems not only enables us to push toward a future with strengthened food security, it may also assist scientists working on neurodegenerative diseases.

“Scientists are now realising the formation of protein liquid droplets is a driving force in many biological systems, as we find more and more instances where this occurs,” he said.

This research is published in Nature. Read full article here.

The work was carried out by researchers at ANU, in collaboration with the Max Planck Institute of Biochemistry in Germany  and members of the ARC Centre of Excellence for Translational Photosynthesis, which main node is located at ANU. 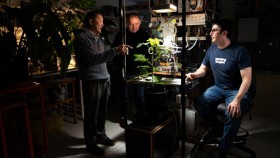