» News & events » News » The history behind our weird and wonderful animals

The history behind our weird and wonderful animals 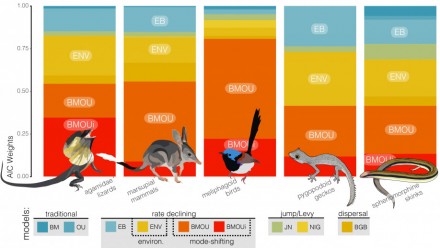 Australia is known for its weird and wonderful wildlife, from frill-neck lizards to sugar gliders and kangaroos.

Now, Ian Brennan and Scott Keogh from the ANU Research School of Biology have discovered these very different animals have something in common when it comes to their evolution.

It turns out the amazing diversity we see now in each of these Australian vertebrate groups developed early, and has slowed considerably over the last 10 million years.

This forced some animals into smaller pockets of habitat.

"It turns out if you look at the marsupials or geckos and the birds, the vast majority of the diversity is really old. Over the last 10 million years or so there's been relatively little change because of those environmental constraints," Mr Brennan said.

"One of the things you'd expect is if the climate starts drying out in Australia - say about 10 million years ago - the forests would be contracting and you'd be getting more open grassland, so animals living in the rainforests might split up, because their habitat is being broken up by encroaching dry habitats."

This split is what actually slowed the rate of diversity. Mr Brennan says it's all to do with access to food and water.

"If an animal for some reason splits into two species of roughly the same size, they're likely competing for the same resources. So what you'd expect is that one of them might change and get bigger or smaller, or change their diet."

"But if those species are separated geographically, they're not competing with each other anymore so there's less competition, and they'll tend to remain similar."

A good example of this is the rock wallabies along the eastern coast of Australia. There are pockets of rainforest house wallabies living along the east coast from Sydney to Cairns that are all very similar, because they haven't faced any pressure to diverge.

"We found a pretty consistent signature in all of the groups we looked at, skinks, geckos, dragons, marsupial mammals and even honey-eaters [birds]," Mr Brennan said.

"They all have a similar pattern in that somewhere between 10 and 5 million years ago they slow way down in how much their bodies are changing."

The results also show the impact global climate change can have on the evolution of our animals.

"This paper is talking about change that happened over millions of years, whereas our current situation is happening very quickly - and lots of solid evidence we have is from other periods that have happened quickly. For example, we have a really good record of what happened in the K-T Boundary period, because tons of things died. This work focuses on much longer periods, so it's a bit of a contrast really."

The research has been published online. 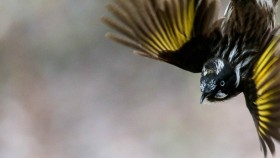 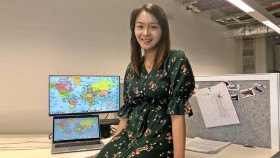