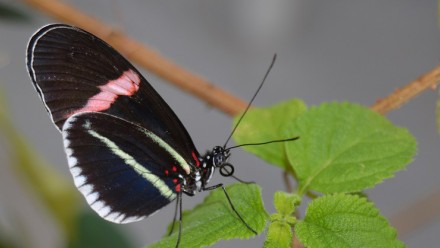 The find is reported in Nature, along with a companion paper that identifies the same gene as the cause of British moths turning black in the grime of the industrial revolution, one of the most famous early observations of natural selection at work.

"It's fascinating that the same gene can be used for different outcomes. It's going to give us a lot of insights into how natural selection really works," Dr Supple said.

Nearly all of the 160,000 types of moth and 17,000 types of butterfly have different wing patterns, which are adapted for purposes such as attracting mates, giving off warnings, camouflage and thermal regulation.

Dr Supple studied the genetic basis of wing colour pattern in Heliconius butterflies in the north of South America. The colouring advertises to birds that they are toxic, and should not be eaten. On the other hand the moth colouring is used for camouflage.

Chris Jiggins, Professor of Evolutionary Biology and a Fellow of St John's College, University of Cambridge, said the complexity of gene mechanisms was a puzzle scientists were still solving.

"Given the diversity in butterflies and moths, and the hundreds of genes involved in making a wing, why is it this one every time?" he said.