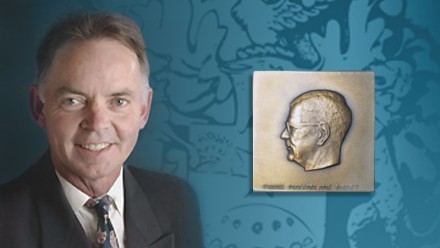 The Australian Academy of Science announced today that Professor Graham Farquhar is to receive their most prestigious award for biological science. The Macfarlane Burnet Medal and Lecture recognises scientific research of the highest standing in the biological sciences. It commemorates the contributions to science by Sir Macfarlane Burnet, OM, KBE, MD, FAA, FRS, Nobel Laureate. Graham is the third member of RSB(S) to receive this award, following Bob Robertson (1975) and Jenny Graves (2006).

“I’m delighted to win this medal, the top award in biological science in the country,” said Professor Farquhar. “I’ve been lucky at ANU to work with good people, some since the seventies. I went to great lengths to keep them all together.”

Professor Graham Farquhar is an outstanding plant scientist whose innovative work has had far reaching impact on our understanding of plant function in a changing world. Combining mathematical rigour and biological insight, his highly cited research has been applied at vastly different scales, from how plants partition their resources between water use and photosynthesis to global interactions between vegetation and the atmosphere. His work has enabled development of crop varieties that are better equipped to cope with changing environmental conditions, particularly those associated with drought.