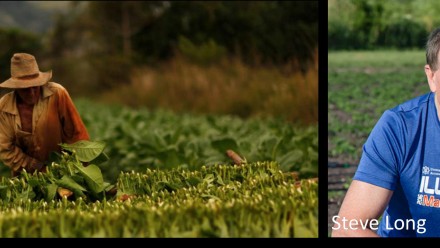 Please join us for this special edition Plant Science seminar to be a co-presentation by Steve Long and Donald Ort who are the director and co-director of RIPE (Realizing Increased Photosynthetic Efficiency).

Realizing Increased Photosynthetic Efficiency (RIPE) is an international research project, funded by the Bill & Melinda Gates Foundation, that is engineering plants to photosynthesize more efficiently to increase the yields of staple food crops and improve global food security. The goal is to equip farmers worldwide with higher-yielding crops to increase income and opportunities.

Steve Long
Demand for our major crops may rise 60% by 2050.  This is at a time when the increases in yield seen over the past 60 years are stagnating and global change poses a further threat to production.  In reality we have little more than one crop breeding cycle in which to insure against this projected global short-fall.  The approaches of the Green Revolution are now approaching their biological limits.  However, photosynthesis, which is among the best known of plant processes, falls far below its theoretical efficiency in current crop genotypes.  Theoretical analysis and in silico engineering have suggested a number of points at different levels of organization from metabolism to crop canopy structure where efficiency of light, nitrogen and water use could be improved[1].  Bioengineering, both as a means and as a test of concept, are now validating some of these suggested improvements with substantially greater and sustainable crop productivity in farm field trials [2,3].  This will be illustrated with specific examples from our work where increased productivity and efficiency of water use has been achieved.

Steve Long FRS holds the Stanley O. Ikenberry University Endowed Chair of Plant Biology and of Crop Sciences, at the University of Illinois.  He is also the Distinguished Professor of Crop Sciences at Lancaster University, UK; and was the 2017/18 Newton Abraham Visiting Professor and Fellow of Lincoln College, at Oxford University, UK.    His photosynthesis research spans from molecular and in silico design to field analysis of performance.  This has been applied in increasing genetic crop yield potential and adaptation to global change. He has identified the most productive terrestrial plant so far known in the wild – the C4 perennial Echinochloa polystachya on the Amazon floodplain and also the most productive temperature plant – Miscanthus giganteus, which has now become a significant bioenergy crop.  At Illinois he led the development of SoyFACE; which today is the world’s largest facility for understanding the impacts of atmospheric change on our major food crops under open air field conditions.  It is a key facility for testing strategies for adapting crops to global climate change.  His mathematically guided engineering of photosynthesis led in November 2016 to a demonstrated on farm 20% increase in crop productivity.  This breakthrough made the front page of the New York Times and was heralded as one of the 12 Scientific Moments of 2016.  This year his team also showed a single gene manipulation that increased in-field efficiency of crop water use by 25%. He is currently Director of the $57M of the international RIPE Project which has developed and is developing such technologies for increased photosynthetic efficiency in crops for sustainable yield increases – this is funded by the Bill & Melinda Gates Foundation, Foundation for Food and Agricultural Research (FFAR) and UKAid.  He also Directs the DOE ROGUE Project which is engineering energy canes, capable for high productivity on marginal lands, and which accumulate large quantities of vegetable oils as a low cost feedstock for biodiesel and jet-fuel manufacture.  He has been listed by ISI/Clarivate as one of the Most Highly Cited Authors every year since 2006.  He was recently awarded the Marsh Award for Climate Change Research from the British Ecological Society and the Innovation Award of the International Society for Photosynthesis Research.  He is Founding and Chief Editor of “Global Change Biology”, listed by ISI as the most Highly Cited journal on Global Change, after only Nature and Science.   He is also Founding and Chief Editor of GCB-Bioenergy and of in silico Plants.  He has given invited presentations on bioenergy, climate change impacts and food security to the President (not the current one!) at the White House, to the Vatican and to Bill Gates.  He serves in advisory roles on key agriculture committees in the US, UK and EU.  He is an elected Fellow of the American Society of Plant Biology and of the American Association for the Advancement of Science.  He was elected a Fellow of the Royal Society in 2013 and was appointed Chair of the Society’s Section on Organismal Biology, Ecology and Evolution in 2014.

Donal Ort
Meeting food demands for the growing global human population requires improving crop productivity, and large gains are possible through enhancing photosynthetic efficiency. Photosynthesis requires the carboxylation of ribulose-1,5-bisphosphate (RuBP) by ribulose-1,5-bisphosphate carboxylase-oxygenase (RuBisCO), but photorespiration occurs in most plants such as soybean, rice, and wheat (known as C3 crops) when RuBisCO oxygenates RuBP instead, requiring costly processing of toxic byproducts such as glycolate. Photorespiration can reduce C3 crop photosynthetic efficiency by 20 to 50%. Multiple attempts have been undertaken to overcome this yield penalty and thereby increase biomass production in plants, with limited success to date. We have recently published details of a synthetic pathway that fully detoxifies 2-PGlycolate inside plant chloroplasts. Field grown transgenic tobacco plants expressing this pathway show strongly enhanced biomass production, suggesting that our manipulations could be used to improve crop yields.

Deputy Director of RIPE, Donald Ort is the Robert Emerson Professor in Plant Biology and Crop Sciences at the University of Illinois. His research seeks to understand and improve plant growth and photosynthetic performance in changing environmental conditions, such as increasing CO2 temperature and drought. Don's research ranges from improving photosynthetic efficiency to the molecular and biochemical basis of environmental interactions with crop plants to ecological genomics. His research spans from the molecular to crop canopies in the field. Don earned his bachelor’s degree in biology from Wake Forest University and his doctorate in plant biochemistry from Michigan State University. He has served as the president of the American Society of Plant Biologists, the International Society of Photosynthesis Research, and the International Association of Plant Physiology. He also served as editor-in-chief of Plant Physiology and is an associate editor of Annual Review of Plant Biology. Don has received numerous awards and recognitions, including election to the National Academy of Science and being named one of Thomson Reuters’ Most Influential Scientific Minds. He has published over 250 peer-reviewed papers in journals that include Science.

25
Feb
2020
Why we should all study (and play) video games - an exploration of human evolution and behaviour »
26
Feb
2020
PS Seminar Series: Beet-ing a path to a greener future – Using field phenomics to tackle major threats to sugar beet  »
27
Feb
2020
Exploring the evolutionary origin of insect wings from an evo-devo perspective »