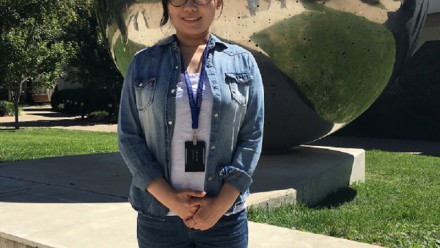 Abstract - miRNAs are a class of small RNAs that negatively regulate gene expression in eukaryotes. In plants, many miRNA families mediate silencing of target genes, which encode transcription factors involved in plant development and plant defence. For my thesis, I have been investigating the miR159-GAMYB module, which appears conserved from basal vascular plants to angiosperms. In Arabidopsis and rice, the loss of miR159-GAMYB regulation has a strong negative impact on vegetative growth, whereas gamyb loss-of-functional mutants display a wild-type phenotype. Therefore, the strong silencing outcome of miR159 against GAMYB is critical for normal vegetative growth. This raises a question: why are GAMYB genes widely transcribed in vegetative tissues only to be strongly silenced by miR159. Firstly, Arabidopsis MYB33 has a strong stem-loop RNA secondary structure abutting miR159 binding site, which is required for strong silencing by miR159. Furthermore, this stem-loop structure is predicted to be conserved in GAMYB homologues from distant plant species. Secondly, to investigate the functional role of miR159-GAMYB module, target MIMIC159 (MIM159) transgenes, which can inhibit endogenous miR159 activity, were expressed in Arabidopsis, tobacco and rice, representative model species for dicot and monocot plants. Phenotyping of MIM159 transformants reveals inhibiting miR159 in all three species give similar phenotypic outcomes, including stunted growth and irregular leaf shape. RNA sequencing results of MIM159 tobacco leaves reveal strongly up-regulation of PATHOGENESIS-RELATED PROTEIN (PR) expression, which have been previously associated with enhanced plant defence. However, PR expressions are not up-regulated in Arabidopsis or rice when miR159 is absent. I will hypothesise that miR159-GAMYB module is functionally conserved in distant plant species, while their downstream events in tobacco leaves seem to be more sensitive to plant defence response.

Biography - Zihui (Amber) Zheng is PhD candidate in Millar Lab, Research School of Biology, ANU College of Science. She has been in RSB, ANU for six years, from Master of Biotechnology to PhD career. Her research has focused on miR159 silencing mechanism and functions in distant plant species.