PS Seminar: Engineering crops for resistance to disease and tolerance to environmental stress 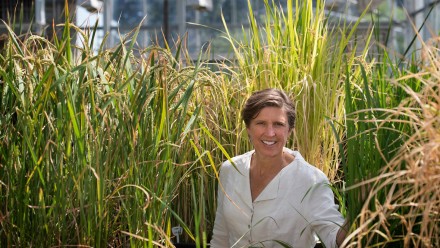 Abstract - A major goal for food and agricultural research is to increase the resiliency of agricultural systems to adapt to rapid changes and extreme conditions. Prof. Ronald will describe how genetic approaches are being used to generate the next generation of crops that will help farmers thrive in these challenging conditions.

Her laboratory at UC Davis studies genes that control resistance to disease and tolerance of environmental stress. Together with her collaborators, she has engineered rice for resistance to disease and tolerance to flooding. Ronald will describe isolation of a rice immune receptor, its similarity to animal immune receptors and the microbial molecule that binds to and activates the rice immune receptor. She will describe isolation of the Sub1A gene and the development of a flood tolerant rice variety (known as ‘Sub1’ rice) produced by the International Rice Research Institute that was cultivated by over six million farmers in India and Bangladesh in 2017. Under submerged conditions, these ‘Sub1’ varieties have enhanced yield and can prevent total crop failure.

Biography - Pamela Ronald is a Distinguished faculty member in the Department of Plant Pathology and the Genome Center at the University of California, Davis.

Pamela Ronald is recognized for research in infectious disease biology and environmental stress tolerance. Her isolation of the rice Xa21 immune receptor in 1995 and of a novel microbial immunogen in 2015 revealed a new mechanism with which plants and animals detect and respond to infection. She is also known for her leading role in isolation of the rice Submergence Tolerance 1 gene. Her research facilitated the development of high yielding Sub1 rice varieties grown by more than six million subsistence farmers in India and Bangladesh.

Ronald graduated from Reed College with a B.A. in Biology, from Stanford University with a M.S. in Biology, from Uppsala University with a M.S. in Physiological Botany and from UC Berkeley with a Ph.D. in Molecular and Physiological Plant Biology. She was a postdoctoral fellow in plant breeding at Cornell University and joined the faculty of UC Davis in 1992. In 2019 she was awarded an honorary doctorate from the Swedish Agricultural University. She is a faculty scientist in Berkeley Lab’s Environmental Genomics and Systems Biology division and a Key Scientist at the Joint BioEnergy Institute. She is a faculty affiliate of the Center on Food Security and the Environment at Stanford University.

Ronald was named a National Geographic Innovator and one of Grist’s 50 innovators who will lead us toward a more sustainable future. She received the USDA National Research Institute Discovery Award, the Louis Malassis International Scientific Prize for Agriculture and Food, and the Tech Award for innovative use of technology to benefit humanity.  She was named one of the world’s most influential scientific minds by Thomson Reuters and one of the world’s 100 most influential people in biotechnology by Scientific American. She is a member of the National Academy of Sciences.

She is coauthor with her husband, Raoul Adamchak, an organic farmer, of ”Tomorrow’s Table: Organic Farming, Genetic and the Future of Food“. Bill Gates calls the book a “fantastic piece of work“ and “important for anyone that wants to learn about the science of seeds and challenges faced by farmers“. Tomorrow’s Table, was selected as one of the 25 most powerful and influential books with the power to inspire college readers to change the world. Her 2015 TED talk has been viewed by 1.7 million people and translated into 26 languages. She founded the UC Davis Institute for Food and Agriculture Literacy to provide the next generation of scientists with the training they need to become effective communicators. In 2019, Ronald was awarded the American Society of Plant Biologists Leadership in Science Public Service Award.