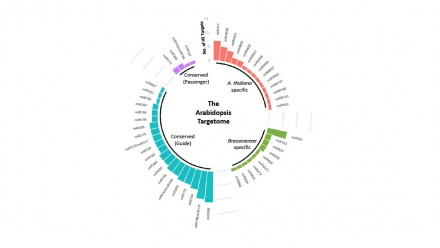 Abstract: In plants, microRNAs (miRNAs) are short non-coding RNAs of approximately 20-24 nt in length which are involved in post-transcriptional regulation of genes controlling many fundamental biological pathways. In association with the endonuclease, Argonaute, they down-regulate target genes of high complementarity via transcript cleavage and/or transcriptional repression at the miRNA binding site. Identifying functional miRNA-target interactions (MTIs) is central to understanding miRNA function, and this has led to the development of many miRNA target prediction tools. However, these tools predict and rank targets based predominantly on the complementarity to the miRNA and results in long lists of targets for which there is no experimental evidence supporting the MTI. This suggests the majority of predicted targets are false positives and has impeded our understanding of miRNA biology and the functional scope of miRNA-mediated regulation in plants.

I have developed a bioinformatic workflow named TRUEE (Targets Ranked Using Experimental Evidence) that scores and ranks MTIs based on the frequency and strength of evidence of miRNA-mediated cleavage from degradome sequencing experiments. As a proof-of-concept, the 428 Arabidopsis miRNAs annotated in miRBase were processed through the TRUEE workflow to determine the miRNA “targetome”. In total, only several hundred MTIs were found to have scores characteristic of currently known functionally significant MTIs. Although non-exhaustive, clearly the number of functional MTIs is much narrower than what many studies claim.

TRUEE was then applied to conserved miRNAs across diverse species to investigate factors beyond complementarity influencing an MTI. We find evidence for several factors limiting target acquisition which include the sequence context of the miRNA binding site and the biological function of the target. Finally, a highly conserved sequence flanking the miR160 binding site of ARF10 was functionally demonstrated in planta to impact its MTI. Overall, using TRUEE to numerically rank targets directly on experimental evidence has given insights into the scope of the functional miRNA targetome of Arabidopsis and the factors which limit it.

Biography: Gigi is a PhD candidate in the Millar Lab, Plant Science, RSB, ANU. Prior to her PhD, she completed a Bachelor of Science (Honours) at ANU. She has previously dabbled in medical sciences in undergraduate research projects but clearly considers plant sciences to be superior.

Please note: this seminar will be held in the Eucalyptus Seminar Room and via Zoom, link below.