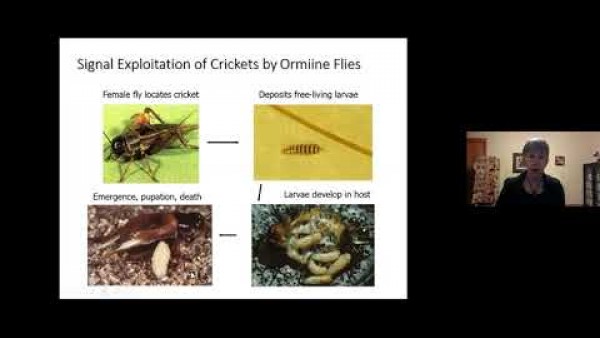 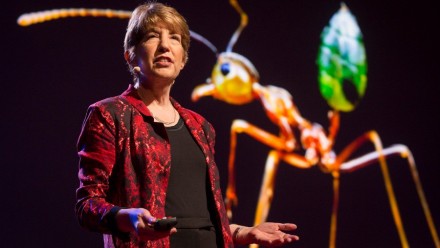 By nature of their conspicuousness, sexual signals can cause a conflict between natural and sexual selection, with natural selection favoring a decrease in exaggeration of an ornament and sexual selection favoring an increase. The Pacific field cricket, Teleogryllus oceanicus, is subject to an acoustically-orienting parasitoid fly where it has been introduced in Hawaii, making calling particularly risky. A novel obligately silent male morph, controlled by a single sex-linked gene, evolved within just 20 generations in some populations in Hawaii. These flatwings are protected from parasitism, but face difficulties in mate attraction and courtship.  Such problems may have been overcome, and the rapid evolution of a sexual signal facilitated, by pre-existing behavioral plasticity, with individuals responding to silent environments, like those with the flatwings, by altering their response to conspecifics. Variation in this plasticity could explain the paucity of examples of rapidly-evolving secondary sexual characteristics.

Professor Marlene Zuk started her career strongly: her first paper in 1982, when still an undergrad, was with W.D. 'Bill' Hamilton and it established the field of studying the links between sexual selection and immunocompetence (4000 citations and going strong). Afterwards, Marlene completed her PhD at the University of Michigan in 1986. She was appointed to a tenured position at UC Riverside in 1989, and stayed there until 2012 when she moved to the University of Minnesota. Marlene has published extensively on parasites, sexual selection and immune function usually working on birds or - most often - crickets. Aside from her highly regarded academic publications, Marlene has published four popular science books that have sold strongly. The most recent is ‘Paleofantasy’ which is a fascinating summary of the past and ongoing evolution of humans. She is currently finishing her fifth book. Marlene is know as a strong advocate for women, and greater diversity, in science. Her distinguished career has been acknowledged in many ways, including being awarded the 2015 EO Wilson Prize and being elected to the American Academy of Arts and Sciences in 2017 and the National Academy of Sciences (USA) in 2019.

We are delighted to have such an eminent person as Marlene deliver our final webinar to conclude the 2020 E&E Seminar Series (Covid-style).

Please click the link below to join the webinar:
https://anu.zoom.us/j/92030422668?pwd=Z3dLcmJESDByZDRDR1ZwaFExSjYwQT09