» News & events » Events » Chiribiquete: videography of an expedition to the centre of the world

Chiribiquete: videography of an expedition to the centre of the world 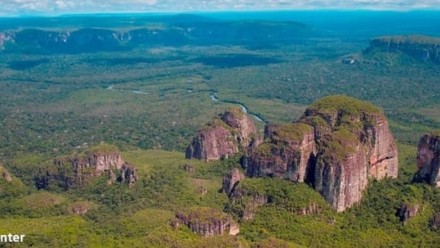 The Embassy of Colombia, the ANU Research School of Biology and the Fenner School of the Environment and Society invite you to a screening of the documentary

Chiribiquete: videography of an expedition to the centre of the world.

The documentary follows a group of scientists exploring the extraordinary biodiversity and archaeological treasures of the Chiribiquete National Park in Colombia. Located in the heart of the Colombian Amazon, this impressive place was recently declared Natural and Cultural World Heritage Site by UNESCO, making it the largest protected tropical rainforest in the world. The documentary also presents the challenges of conservation before and after the peace process that ended 50 years of conflict in Colombia.

A forced landing caused by a storm, led a passionate scientist to find a paradise that he would end up devoting his life to. Today, 30 years later, he returns to the Chiribiquete Mountain Range, to lead an expedition in which he is reunited with the tepuis, one of the oldest geological formations on the planet, and the ancient rock art that make it a place of great archaeological interest.

Directed by Carlos Arturo Ramirez, and produced by Colciencias, the Department of Science, Technology and Innovation of Colombia, this premier screening in Canberra will be introduced by the Colombian ambassador in Australia, His Excellency Mr. Jaime Bueno-Miranda.