» Study » Student projects » Re-assembly of biological communities during the Cenozoic

Re-assembly of biological communities during the Cenozoic 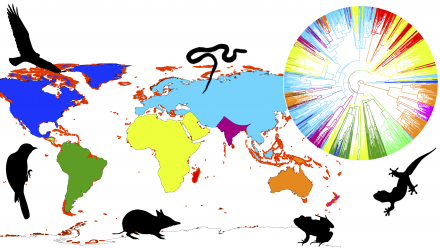 Historical biogeography and macroecology of the Cenozoic

We are currently in one of the highest peaks of biological diversity on Earth history, in spite of the recent declines caused by human activities. During the Cenozoic (last 65 millions of years), after a massive extinction including most of the dinosaurs, there was a big turnover of the biological communities followed by lots of tectonic activity, mountain lifting and climate oscillations. In this period some biological groups experienced a great diversification (e.g.: mammals, birds, squamate reptiles, amphibians), contributing to a big reassembly of communities, sometimes resulting in very high species richness and high spatial and temporal turnover.

The recent availability of fossil-calibrated phylogenies and distribution data for many groups of organisms, allows exploring questions about how biological communities changed in the past and resulted in what we have in the present. Carrying out a project addressing these questions is an excellent opportunity to gain skills in big database organization, phylogenies, spatial data, GIS, programming in languages such as R, and, potentially, phylogenetic comparative methods (such as ancestral biogeographic reconstruction, trait reconstruction and others).

Below there are some ideas for projects that fit within this framework, but also if you have different ones, feel free to discuss them with us.

The Theory of Island Biogeography (TIB) is one of the most solid theories in ecology with important consequences for the study of evolution, invasion ecology, conservation and management. The TIB predicts that island communities originate from subsets of mainland communities that depend on the area of the islands and their distance to the mainland, with the possibility to evolve into new species after isolation. We will be exploring questions related to the TIB including metrics of diversity, both at compositional and phylogenetic level.

Evolutionary history of traits in a biogeographic and community ecology context

Examples include the evolution of some fascinating behaviours that meant important ecological changes, such as the appearance of particular breeding behaviours, biotic interactions, seasonal movements… In many cases these changes meant reassemblies of the communities or coevolution with other groups of organisms. Reach us out to know more about options we have in mind or to discuss some ideas that could fit within our possibilities.

This project is open to Bachelor, Honours and Masters students