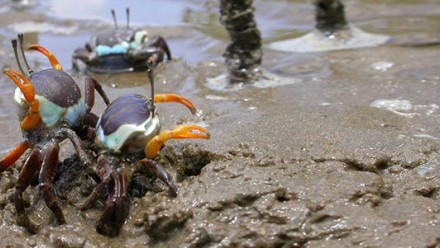 We  work on many aspects of the natural (field-based) behaviour of fiddlers.

Luck affects our lives in numerous ways: a car accident, meeting Mr. Right, missing a plane. Does luck also affect the lives of animals? Do some animals get lucky breaks while others never get a break? This project looks at the role of chance in the lives of free-living animals: fiddler crabs in the mangrove forests of Darwin, Northern Territory. How much control do individuals have over important aspects of their lives, like their mating success?

One of the major effects of climate change is rising sea levels. This will have devastating effects for those who own million dollar waterfront properties, but it will have even greater effects on the animals that live in mangrove forests at the water’s edge. As the space available gets smaller and smaller, animals will be increasingly stressed by competition, overcrowding and disrupted life cycles. Intertidal animals are the first to feel the effects of sea level rise. Can they adapt? This project examines the stressors and responses of fiddler crabs to sea level rise in the mangroves of Darwin, Northern Territory.

Synchronised movements are extremely common in many animals.  Synchrony is a key element of human dance and music; and our heart muscle cells contract in synchrony to facilitate each heartbeat. Fish schools turn in synchrony. Many birds fly in synchronous twists and swirls. Synchronised movements are almost always a co-operative behaviour in which each individual benefits by being in synch with others. In the fiddler crabs of Darwin, however, males wave in synchrony when they are trying to attract a female for mating; and this behaviour is NOT co-operative. It is, in fact, competitive. Males compete with each other to wave before other males (because females have a strong preference for leading waves). This project looks at the differences between cooperative and competitive synchrony in many systems, including the fiddler crabs of Darwin harbour.

Weare also looking for PhD students to work on the following topics:

This project is open to Masters and PhD students