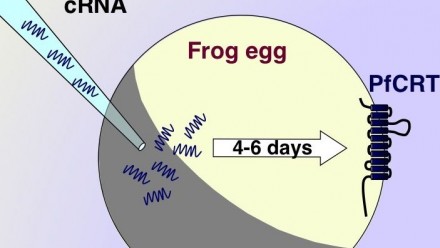 The quinoline drug chloroquine served as the frontline treatment for malaria from the mid 1940s to the 1990s, by which time the emergence and spread of chloroqune-resistant parasites had rendered the drug ineffective in most endemic regions. The non-quinoline antimalarials deployed to replace chloroquine have by comparison suffered short life spans.

Chloroquine-resistant parasites accumulate much less chloroquine than do sensitive parasites, and this difference is attributed primarily to small changes in a single protein, the “chloroquine resistance transporter” (PfCRT). Furthermore, mutations in this protein also modulate the parasite’s susceptibility to a number of other clinically important drugs. However the mechanism by which mutant PfCRT confers reduced chloroquine accumulation, and hence chloroquine resistance had, until recently, been unclear. We established a novel and robust system for the expression of PfCRT in unfertilized frog eggs (Xenopus laevis oocytes) and shown that the resistance-conferring form of the protein possesses significant capacity for transporting chloroquine away from its site of action, whereas the wild-type protein does not (Martin et al., Science 2009). We are currently using the PfCRT expression system to explore a number of important aspects of this protein including:

Papers from this project: