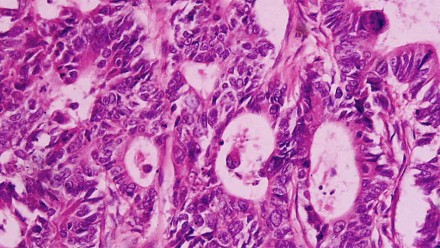 Transformation of differentiated cells into tumour cells is accompanied by complex remodelling of cellular metabolism to support the demands of a dividing cell. The switch from oxidative metabolism to the production of lactate is well known, however, it is less well known that most tumour cells use large amounts of glutamine in a pathway called “glutaminolysis”. This pathway entails a partial TCA cycle converting glutamine into aspartate or alanine. The uncoupling of glycolysis and TCA cycle and conversion of the TCA cycle into a linear metabolic pathway (glutaminolysis) allows cells to generate energy and building blocks for growth.
The hypothesis of this proposal is that tumour cells, due to their modified metabolism, are extremely reliant on the uptake and release of metabolites. In particular tumour cells need to take up glucose and glutamine while releasing aspartate, alanine and lactate. While all cells in the human body are reliant on glucose uptake, only a few cells in the body require similar amounts of uptake and efflux of the other four metabolites. As a result tumour cells are vulnerable to inhibition of glutamine uptake, aspartate and lactate efflux, while other cells in the body are not.