» Study » Student projects » The biology of the mitochondrion of apicomplexan parasites

The biology of the mitochondrion of apicomplexan parasites 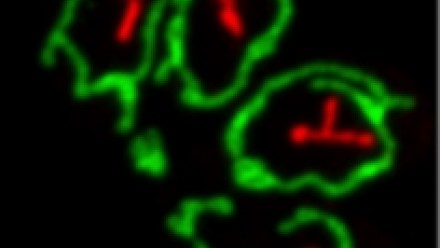 Our lab has a long-standing interest in the biology of the mitochondrion of apicomplexan parasites. The mitochondrion of these parasites has a range of canonical functions, including in the production of cellular energy (ATP), and the biosynthesis of important iron-containing protein co-factors such as haem and iron-sulfur clusters. There are, however, notable differences that set apicomplexan mitochondria apart from those in other eukaryotes, including components of the electron transport chain and some of the enzymes used to generate energy. Using proteomic approaches, we recently identified ~200 mitochondrially-localised proteins that have no predicted function but which are important for parasite proliferation. We aim to identify the functions of these and other essential mitochondrial proteins in Toxoplasma gondii. Through collaborations with Alex Maier and Kevin Saliba, we are also examining these processes in Plasmodium falciparum. Our current projects examine:

Our approaches in addressing these questions include:

Recent papers from this project that summarise the sorts of questions we are interested in: