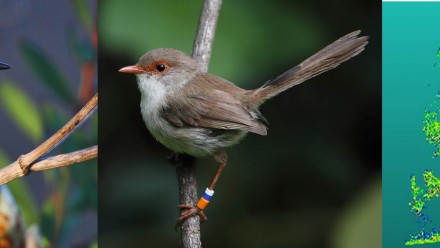 Project: Many wild animal populations have recently declined in numbers, but determining the exact causes of these declines and the mechanisms by which environmental change affects individual fitness is difficult. The aim of this project is to test the extent to which fine-scale biotic and abiotic environmental variation can explain a decline in a population of a common, cooperatively-breeding wild bird in south-east Australia. Our detailed long-term study of superb fairy-wrens (Malurus cyaneus) has revealed a dramatic decline in population size over the past three decades. The project will combine the extensive life-history data on the bird population with long-term remote sensing data, terrestrial laser-sensing measures (LiDAR) and ground surveys to assess the contribution of spatial and temporal variation in vegetation structure to population dynamics. It will aim to test the interactive effects of a changing climate and ecological conditions on bird population life-history, including a marked decline in the extent of cooperative breeding in the study population. There is also the potential to use new high-density genomic data to assess changes in spatial genetic structure over time, or to extend the project in other directions particularly suited to the interests of the student.