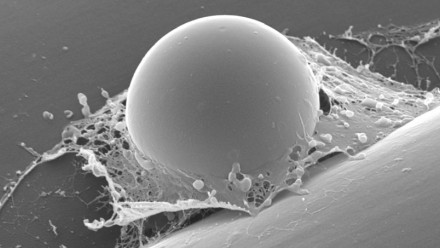 Rapid secretion of adhesives attaches pathogen spores to the surface of potential hosts.

Spore attachment to the host surface is an important factor in the infection of plants. We were the first to clone a gene (PcVsv1) encoding a fungal or oomycete spore adhesive protein (Robold and Hardham 2005) and found that it contained 47 copies of a TSR1 motif found in adhesives in animal cells and malarial parasites. We also discovered that Phytophthora zoospores contain a complement control protein that may also act as a spore adhesive (Škalamera, and Hardham 2006). These proteins are packaged into distinct vesicles and undergo regulated secretion during the onset of infection.

We are currently investigating the molecular regulation of adhesive protein synthesis and secretion and determining the contribution of adhesion to successful infection.