Our research is focused on understanding plant metabolism, mostly using stable isotopes (13C, 15N, 33S) and metabolomics. We use both natural isotope abundance and isotopic labelling to shed light on metabolic fluxes and interactions between metabolic pathways. Plant leaves have competing metabolisms occurring at the same time (photosynthesis, photorespiration, mitochondrial respiration, nitrogen and sulphur assimilation) but the means by which they are reconciled and orchestrated within plant cells is not well-documented. The results from our group provided evidence that:

Story | Thursday 27 October 2016
A team of four high school students&nbsp;went to Hanoi, Vietnam for the 2016 Biology Olympiad individual competitions; a week of theory and practical exams. Out of 176 competitors, three Australian students were awarded a silver medal each, with our final competitor earning a bronze. A great result and many thanks to Guillaume Tcherkez and Bee Gunn for lending their time and expertise to teach the students.

Story | Thursday 29 September 2016
Scientists at The Australian National University (ANU) are working with researchers in France to develop a new potential way to detect and monitor breast cancer&nbsp;that could involve a simple blood test.

With no doubt, teaching is a pleasure when I see students marvel at biological mechanisms and adaptations, particularly in the field 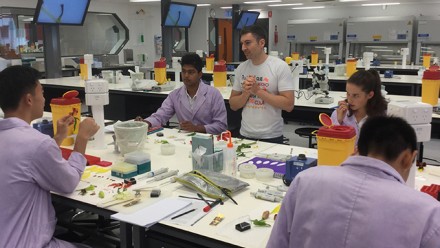