The Price lab is presently focusing on the molecular biology and physiology of photosynthesis in cyanobacteria (blue-green photosynthetic bacteria) with emphasis on gaining a full understanding of the adaptive mechanism known as a the 'CO2 concentrating mechanism' in these organisms. The CCM operates to elevate the CO2 concentration around the otherwise substrate-limited primary carboxylase, Rubisco, thus improving the efficiency of photosynthetic CO2 fixation. The system features inducible and constitutive transporters for CO2 and HCO3- that actively accumulate HCO3- within the cell through a light-dependent process. Accumulated HCO3- then enters a unique polyhedral Rubisco-containing organelle known as a carboxysome. Here CO2 is generated and maintained at a high steady state concentration with the aid of a carbonic anhydrase enzyme that is specifically located in the carboxysome. In addition, a special property of the carboxysome retards CO2 leakage leading to efficient CO2 fixation. We have produced a suite of defined CCM mutants for intensive analysis. Combined with the existence of several complete genome sequence databases for cyanobacteria, plus some modern molecular techniques, we have some powerful resources available for the molecular elucidation of the CCM. A present goal of this work is to allow the engineering of some useful CCM components into higher plants so that water and nitrogen-use efficiency can be improved.

Event | Fri 11 December 2020
This thesis aimed to resolve how cyanobacterial Rubisco interacts with its binding partners both in vivo and in vitro.

Story | Tuesday 4 September 2018
Scientists at ANU&nbsp;have engineered tiny carbon-capturing engines from blue-green algae into plants, in a breakthrough that promises to help boost the yields of important food crops such as wheat, cowpeas and cassava.

Story | Monday 18 September 2017
The Australian National University (ANU) will help to boost food production to feed a rapidly growing world population as part of a major international research collaboration supported by tens of millions of dollars in new funding.

A university degree that helps put food on the table

Story | Thursday 21 July 2016
Laura Wey has used her undergraduate research experience at ANU to help grow a better future for us all.

Improving gender balance in science: the time to act is now. And everyone has a role to play.

Story | Tuesday 23 September 2014
It has been proposed that cyanobacteria — which obtain their energy from a highly efficient form of photosynthesis — might hold the key to increasing the yield of our most important crops and vegetables. 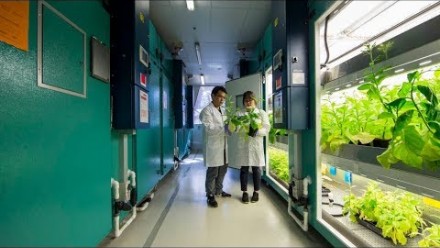 How to put together a fast carbon-capturing engine: lessons from blue-green algae »