The overarching theme of our research is to determine the controls and regulators of communication between the chloroplast and nucleus. This includes discovery of genes and metabolites involved in epigenetics, RNA metabolism, chloroplast-nuclear signaling, carotenoid biosynthesis, photosynthesis and drought.

The Pogson Group plays a key role in the Australian Research Council Centre of Excellence in Plant Energy Biology (PEB), a cutting edge research centre focused on better understanding the way in which plants interconvert forms of chemical energy in response to environmental change. PEB’s vision is to enhance plant energy efficiency by simultaneously optimising energy capture, conversion and use in changing environments to improve the sustainable productivity of plants. The Atkin, Borevitz and Pogson labs also collaborate in an (International Wheat Yield Partnership Grant) to improving yield in wheat by optimising energy use efficiency.

PEB has over 110 internationally competitive staff and students across four Australian Universities (ANU, UWA, UoA & LaTrobe) work together to define the complex system that determines overall energy efficiency in plants by discovering the key signals, 'gatekeeper' cells, and (epi)genetic controls that regulate this energy system and to manipulate these in combination in order to tune energy efficiency across the whole plant to enhance yields.

Accomplishments thus far include: In the last 5 years PEB has secured over $40 million in research funding (2014-2015) and published over 250 articles including key breakthroughs published in Nature, Cell, Science, PNAS & Plant Cell = more than 20% of all Australian publications in top-ranked plant science journals were authored or co-authored by PEB staff.

Abstract - Through the evolution of plants, the carotenoid biosynthetic pathway underwent a multitude of alterations increasing it

How did plants conquer land?

Story | Tuesday 5 March 2019
An international study has found a drought alarm system that first appeared in freshwater algae may have enabled plants to move from water to land more than 450 million years ago &ndash; a big evolutionary step that led to the emergence of land animals, including humans.&nbsp;

When a passion for science means business

Story | Tuesday 10 July 2018
A passion for the business side of science has helped John Rivers land his dream job, just weeks after finishing his PhD.

Story | Tuesday 26 September 2017
A team of RSB researchers has been recognised nationally for their outstanding contribution to student learning, at the&nbsp;Federal Department of Education and Training&rsquo;s&nbsp;Australian Awards for University Teaching. 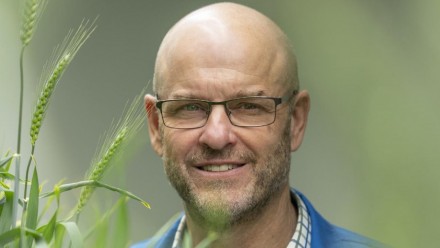