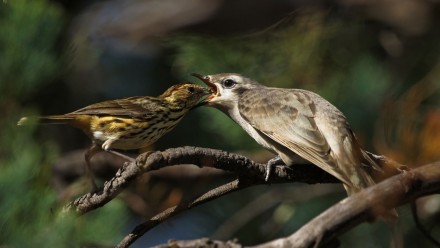 We study many aspects of evolutionary and behavioural ecology in birds, with particular emphasis on co-evolution between brood parasites and their hosts, signalling (songs, calls and displays), mimicry and crypsis, breeding systems, and evolutionary responses to climate change. Our main approach is to use field experiments and observations to test evolutionary theory.

E&E PhD Exit Seminar: An imposter in the nest: rejection of cuckoo chicks by a host using true recognition

Interactions between avian brood parasites and their hosts are one of the most suitable model systems for studying coevolution.

Story | Tuesday 1 October 2019
Five years ago, an ANU biologist proved that most female songbirds sing, but it’s a finding that many people are struggling to accept.

Story | Thursday 7 June 2018
A study led by ANU has discovered how a mother knows her chicks and can spot an imposter in her nest, even if it looks almost identical to her own chicks.

Story | Thursday 1 December 2016
The female Superb Fairy-Wren has the ability to change the size of the eggs it lays,&nbsp;a biological feat which could buffer against the effects of climate change.

Cotton wool could save the endangered forty-spotted pardalote

Story | Tuesday 1 September 2015
Amanda Edworthy is trialling a&nbsp;novel method of controlling the fly larvae in a bid to save the extremely rare 40-spotted pardalote..

Cuckoos trick other cuckoos in the race to own the nest

Story | Wednesday 13 August 2014
Australian native cuckoos are engaged in an arms race, competing with each other to take over other species’ nests. 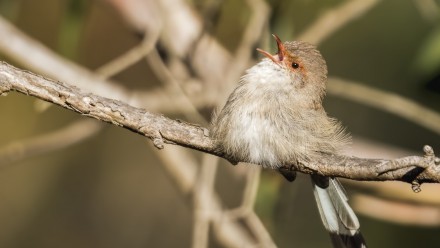