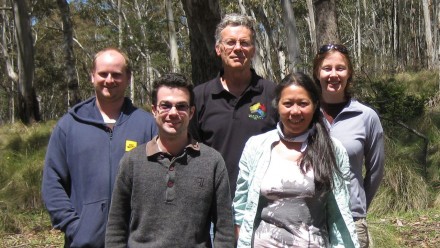 Our research interests include:

Story | Thursday 17 August 2017
Fire plays an important role in shaping the Australian landscape and its flora and fauna. This influence is millions of years old, and is the focus of research led by Professor Emeritus Mike Crisp.

Unlikely pair of plants named after stars of movie 'Twins'

Story | Tuesday 2 May 2017
ANU biologists have named an unlikely pair of plants after Arnold Schwarzenegger and Danny DeVito, the stars of the 1988 movie Twins.

Story | Thursday 7 July 2016
David Kainer and Carsten Kulheim have published an article in The Conversation, which describes how Australia could use the diversity of its naturally occurring eucalypts to develop and sustainably farm variants with high yields of desirable essential oils, for new commercial purposes.&nbsp;